We are a community-supported website. We may earn a small commission on purchases made through our links. Learn more. 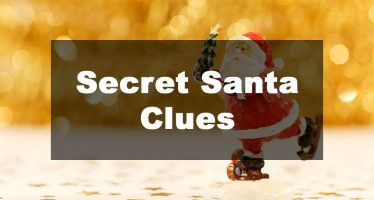 Secret Santa is probably one of the most played games during the eve of Christmas.

As this is completely a fun-filled game, clues are mandatory to kindle the attention of participants.

So, how do you create such clues?

We have developed a collection of examples of such clues along with notes that you can use to play the game.

Clues need not always lead to the answer. They can even arouse the emotion and encourage the person to involve further.

Some clues prolong the game and keep the player occupied with them for some time.

Here are a few generic secret Santa clues that you can use to your friends and family. These are simple and interesting to crack. If you are playing it inside your house, allow the person to experience a hunt and find out the gift they have wished for.

As the gift is identified, let the person also find his or her secret Santa. Sometimes, gifts indicate the person who has gifted.

For example, your friend would have shared with you that he needs a bicycle and you would have gifted it. This makes it easy to guess.

Some more templates that you can use to play scavenger hunt on the eve of Christmas are right here. So, how can one find secret Santa?

You can provide clues in the form of sayings or poems or a riddle.

Some people also prefer providing a small gift that can lead to a bigger one. It is a wise idea to attach a clue to the gift so the person can guess it out. It is absolutely fun to crack riddles and find the answer. The key is to avoid being very specific about the clue.

This will allow the person to enjoy to the fullest.

Some more templates of riddles are right here. Clues will make playing Secret Santa with your students so much fun. If you are not sure which template to use, here is one you will definitely love. With the holiday season knocking at the door, it is time to work on your gift ideas and clues for coworkers.

As for your coworkers, they observe and see you all the time so giving a clue can be a tad bit adventurous.

You can download one of these free printable templates. How To Come Up With The Best Clues?

When you create a clue, make sure that you pay attention to the following points. Your clues can also be in the form of letters. Write out your personal experience with the receiver and recall one such situation.

Indicate clues that will allow the person to relate to the situation and recall what happened. This is damn easy and thrilling too.

Some people prefer gifting after the receiver finds the answer to the riddle.

Some attach the clue with the Christmas gift.

It is entirely up to you! Some mistakes that you should avoid are right here.

What do I write on a secret Santa note?

Things get interesting when there is an untold mystery behind gifts! Everyone can give a present but a gift with emotion means a lot to the recipient.

Clues and riddles can be a pretty interesting way to keep kids excited about their gifts.

You can place the gift at a random place, give the player hints and organize a scavenger hunt.

Your secret Santa note can also have naughty or nice clues. Such a note is meant to throw a riddle and encourage the kid to find the gift.

The note can also contain guess who tags. For example, He is fair and handsome and gets you a chocolate ice cream every week. Guess who?

Kids love Treasure Hunt, how about playing it?

How do you reveal Secret Santa?

It is a beautiful Christmas tradition in which group members are randomly assigned a person to whom they have to give a holiday gift.

Ideally, the identity of the person giving the gift is kept secret and not revealed.

Do Secret Santa reveal themselves?

No, secret Santa does not reveal itself. Though group members can include a guess who note with few clues for the receiver to guess who the gift giver is.

The basic concept of the game is simple.

Participants’ names are placed into a hat and each member then chooses one name from the hat, but the name picked is kept secret.

How do you make Secret Santa Fun?

For those of you who haven’t played the game for a while; note that the basic rules are simple.

Each participant places their name in a hat.

Each group member selects one name without telling anyone else whose name they drew. Then they secretly buy their chosen recipient a gift.

LEFT RIGHT LEFT game is an exciting Secret Santa game for kids. You can either get a story online or create one yourself and include words left, right, left in it. Kids pass their gifts when the word” Left” or “Right” comes in the story. The game ends when the story is complete and each kid gets their gift.

Kids love the Hot Potato Gift Exchange game as it works well for gift exchanging. What you need for this game is a hand-held timer. Children can pass around gifts one at a time. The child who has a gift when the timer goes off becomes the owner of the gift.

You can continue this game until each participant receives a gift. Kids can open their gifts as soon they receive them or wait until the game ends.

This article includes as many printable templates containing clues that you can directly use or treat as an inspiration for a new clue that you are about to create.

Never lose a chance to add that extra fun to your special occasion!

Hi, I am Sara Cemin and I’m all about designing meaningful stuff such as templates, Forms that are required in various activities of business and academics.I take a research-driven approach to cumulate the best templates on any topic,